Taking on the Driver’s Seat 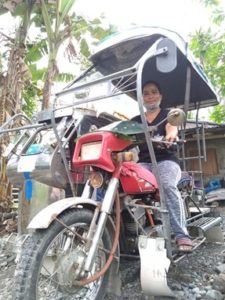 Liza Ganabol, 43, drives her late husband’s tricycle around the small town of Pola in Oriental Mindoro to support her family.

Buses, jeepneys, and tricycles often dominate the streets of the Philippines. In fact, jeepneys, being the primary mode of transportation of the masses, are called hari ng kalsada or king of the road. This is due to the engine’s propensity to rev up and make a statement, and in part, because men steer the wheel.

May it be buses, jeepneys, or tricycles, motorists are often men, while women are usually delegated to the passenger’s seat. However, one woman in the small town of Pola in Oriental Mindoro took the driver’s seat of her own life, becoming the only female tricycle driver in their barangay.

Behind Liza Ganabol’s strength is a story of vulnerability. With her husband diagnosed with diabetes in 2001, Liza had to look for ways to sustain her husband’s needs. For years, Liza had to take over her husband’s tricycle to bring him to and from the hospital for his weekly insulin medication. She balanced her time between her service to her husband, her support in the education of her children, and her work in the rice fields.

Alas, after two decades of fighting the condition, her husband died in September 2021. From then on, Liza committed to taking the driver’s seat for her and her two children.

From the day Liza assumed the responsibility of being the head of the household, driving her tricycle around Pola, she had exuded courage unlike any other. But even the best warriors get weary in their battles. Fortunately, CARD Mutually Reinforcing Institutions (CARD MRI) became the gasoline that kept them running when her husband died.

Being a client of CARD Bank, a microfinance-oriented rural bank under CARD MRI, Liza is automatically enrolled as a member of CARD Mutual Benefit Association (CARD MBA), one of CARD MRI’s microinsurance arm. When her husband died, Liza received approximately PhP70,000 from the Association, which helped her and her family start over. With the benefit she claimed, Liza was also able to settle her children’s tuition fees as well as the debt that accumulated during her husband’s medication.

With her bravery in facing death, her strength in raising her children, and CARD MRI, her partner in spurring her life towards recovery, Liza continues to steer the course of her family’s life through the tricycle that now dominates the roads of a small neighborhood in Pola.

CARD MRI is a group of mutually reinforcing institutions working together to bring out relevant and affordable services for the Filipino poor. With the microfinance institutions (MFIs) under CARD MRI, CARD Bank being one of them, clients are provided with assistance in the form of loans, savings, remittance, and other products and services that aim to support their financial needs. On the other hand, CARD MBA secures the future of the MFIs’ clients by providing financial and non-financial assistance in the form of insurance and other services.